This a series where I, @aj_thetarsier (aka Andrea Millard), go on lengthy rants about TV. Enjoy (or don’t enjoy. Whatever, jerk)!

I may not be Dean Pelton, but I have come to cherish Community much in the same way that the Dean of Greendale Community College has, upholding Winger, Troy, Abed, Annie, Britta, Shirley, Pierce, and Chang as my own family, putting them first before other pragmatic, pressing matters. For the Dean it was solving all the school’s problems. For me, it was dishes and/or showering.

Unfortunately, I don’t own as many cool costumes as the Dean. 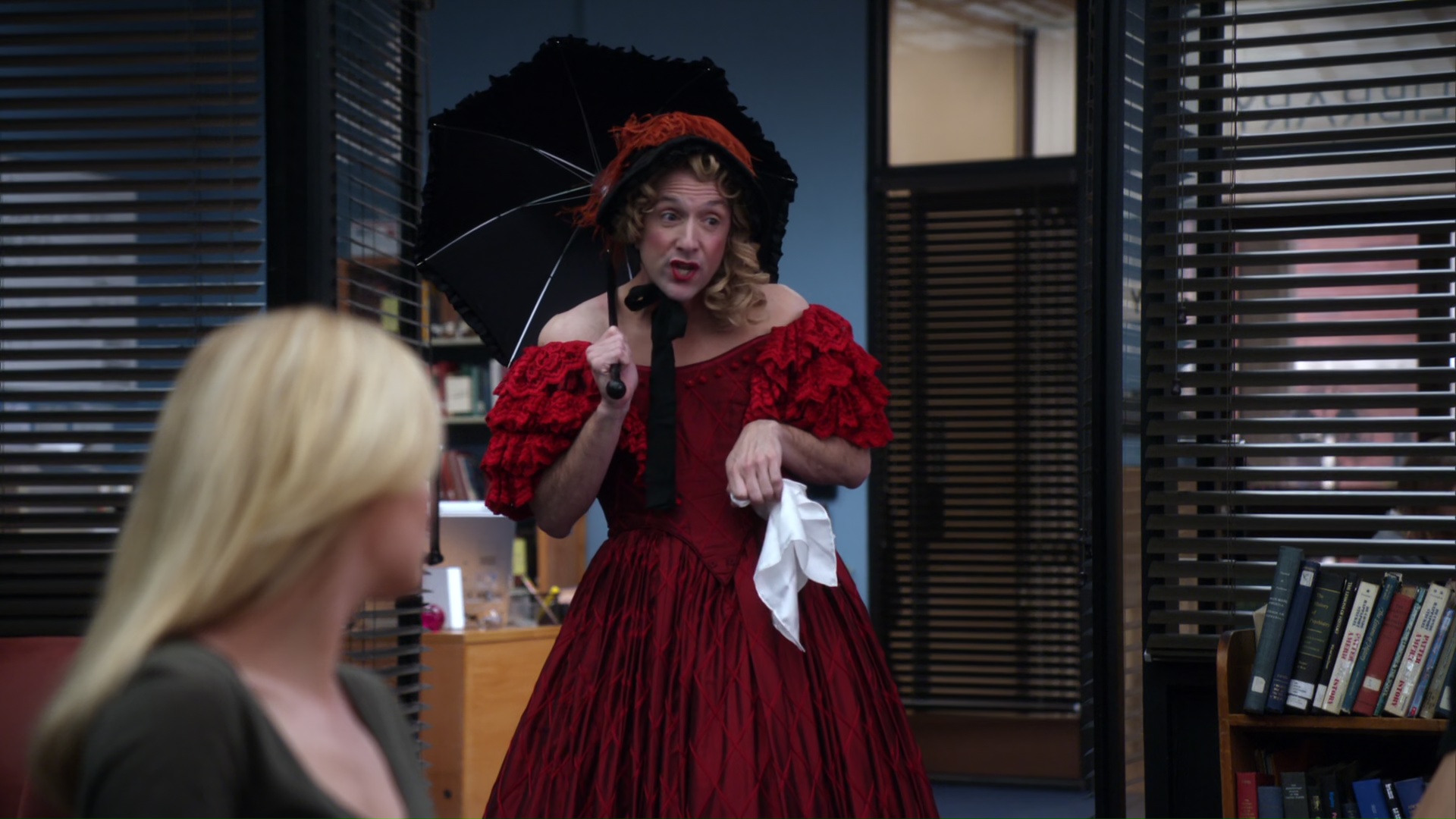 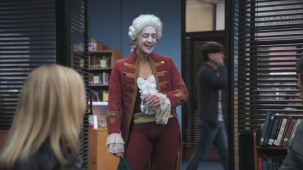 I think all Community fans feel a bit like the Dean. That is, on the fringe of things. A part but not a part of the study group.

Community is a show that was ahead of its time by a few years, before Netflix originals and niche marketing became commonplace. Community was able to survive on NBC, but it was an uphill battle from the beginning. Like any show on network television, ratings became an issue despite critical acclaim.

Loyal fans were one of the components that kept the spirit of Community alive – much like the fan-base behind the original Star Trek only add social media.  In the case of Star Trek, things were kept alive through Trek conventions and letter writing. In the case of Community it was that stuff plus Twitter and Youtube and gifs and memes and posters that look like advertisements for The Social Network: 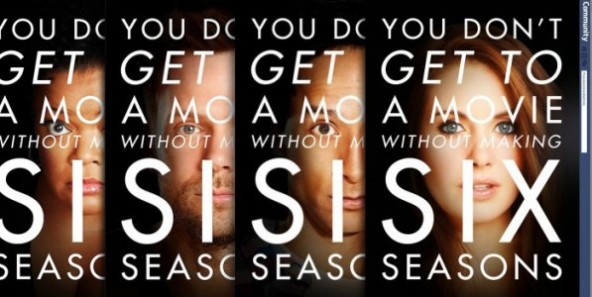 Joel McHale  (aka Jeff Winger) even mentioned when the show was canceled after season 5, “I think we know there’s going to be a sixth season since you [fans] will probably show up with pitchforks and torches.” In fact, the fan rallying cry #sixseasonsandamovie started back in 2011 when Abed exclaims “six seasons and a movie!” in “The Cape” (S2, E21).  At the time, the hashtag was just a fan quoting Abed on Twitter, but it evolved into a social media campaign that helped keep Community alive in our hearts and minds.

Community arrived on the fringe of other NBC success’s like The Office and 30 Rock. Harmon went along with those show’s sensibilities which are often meta, jam packed with jokes (blink and you will miss sometimes), but maintain plenty of heart.

Though Community is similar to other NBC shows in terms of it’s hyper-active joke style, it is also delightfully weird, and what I would like to coin as delightfully Harmon. If there is one thing I have learned from watching Community, it’s that Dan Harmon knows story and knows how to interweave character arcs together in a much more exciting way than a series of cafe/office/household conversations. There is adventure, motion, movement. He also seems to just know how to make things, for lack of a better word, likable. In a weird way it was like the show was preordained to be a cult favorite. Like I’m predisposed to like it just because I don’t know! It’s good?! It probably has something to do with my age, socio-economic status, and my predilection for a silly pun.

I really want a scientific answer. Like it is really due to the ratio of Joel McHale’s inspiring speeches to the number of times Yvette Nicole Brown says “That’s Nice” in a given episode. Or it is based in the symmetry of Danny Pudi’s face. Give me about 10 more years to figure out the mathematical equation.

Regarding what I do know, the show has characters that are both conversely laser-focused and  flexible enough for growth.

Winger is a self-absorbed lawyer; Troy is a jock with a soft heart; Abed is a pop-culture junkie who does whatever he wants; Annie is a smarty pants who fell off the smarty wagon; Britta is an activist but not particularly good at anything; Shirley is a mother of three and probably – in an odd way – the most complex character – that is – a strict, Christian woman with past demons; Pierce is a racist, rich, old white man who just wants to fit in; and Chang is a crazy Spanish teacher – the teacher who teaches the class that unites all these unlikely friends in the first place (he also becomes several other things like a dictator, a security guard, and an A/C vent dweller – but let’s not get into it. I feel like we would need another article to chart out the plot line of Community). Each character has a flaw, and therefore has room to grow. What one character may lack, another character doesn’t. These characters are a team of misfits who help one another. How wonderful is that?! I’m not crying; you’re crying.

Anyway, each story is an epic tale, a hero’s journey. Harmon has unlocked the key to great storytelling, a method of viewing stories as circles or embryos with eight steps:

“1. A character is in a zone of comfort or familiarity.

3. They enter an unfamiliar situation

4. They adapt to that situation.

5. They get that which they wanted.

7. They return to their familiar situation.

8. They have changed as a result of the journey.”

Community is in all sense of the word – epic. It takes epicness to a whole new level for a sitcom adding elements like claymation, animation, stunts, a boat, a space ship, alternative time lines. The show blends genres (namely sci-fi and horror) like nobody’s business. Except it should be everyone’s business. Why was it not everyone’s business??

Apart from the fear of no renewal, there was other trouble in paradise. Harmon left the show after season three due to blah blah politics blah blah network stuff blah blah low ratings blah blah squabble with SNL star Chevy Chase who played Pierce on the show blah blah Harmon may be self-destructive.  So Moses Port and David Guarascio replaced Dan Harmon as showrunner and executive producer. To everyone’s surprise, however, and largely do to Joel McHale’s insisting, Dan Harmon was brought back for season 5. Hooray!

I have been trying to rack my brain around this. Why didn’t Community have a bigger community behind it? It had all the action of blockbuster movies. Shouldn’t it be more appealing to a widespread audience? I don’t know. Maybe it was just too cute, endearing, and unique in a way you might not associate with big hit wonders (though the best big hit wonders are also – at least – cute and endearing, aren’t they? Isn’t that like the code of every Marvel and Pixar movie ever made…like ever?) Maybe that was it. Community isn’t cookie cutter enough. It’s so many things. It’s Law and Order and Dr. Who and The Walking Dead and none of those things. It’s a show about the left behind. Maybe people don’t want to embrace that reality. Maybe it is just too nerdy, and I’m just too much of a nerd to see past the fact that it is perfectly catered to someone like me but not everyone. Or maybe it was just a time slot thing.

To me this show is escapism at its finest (I mean it is in the first line of the show’s theme song after all: “Give me some more time in a dream.”) It is never evolving, and ever-evolving. Paradoxically familiar and new. Well, until it was canceled after season five. But then it was saved! To stream online through Yahoo!

Who knows? Maybe the six seasons could have been eight if a streaming service picked up the show sooner. Where everything is about algorithms and catering to your tastes, maybe streaming would have been the best thing for Community‘s success. Then again, maybe it wouldn’t. Maybe Community was perfect and historic in how it bridged the gap from a network to a digital platform.

I had not engaged with Community (really) until now, mostly because I was a poor college student at the hey of its heyday who didn’t own her own TV (Excuses! I know). When my college screenwriting TA showed me a clip of the pilot, I was like “Cool, funny” then I proceeded to forget about it (like a jerk) until I happen-stanced watched it at a friend’s apartment on DVD, and I was like “This is such a good show. Why was I not watching it earlier?!” (Because I’m a jerk!)

I am miffed, because I could have contributed to the show’s viewership. I could have told all my friends “go watch this show!” while it was on NBC and maybe that could have contributed to boosting the show’s ratings by a fraction of a percent or maybe even a whole percent (DREAM BIG). I could have viewed the show when it mattered to everybody in the cast and crew who probably worked 10 hour workdays just to entertain us! It’s harder than it looks (But also, c’mon guys, you have a great job). These are the things that keep me up at night!

You know, along with climate change.

I mean, my single viewership would not have made a difference, but still. The fact that I would have engaged in a community, the community of Community, even as just my tiny, awkward, insignificant self – a spec in the universe – I would have showed that I cared. Like voting. It’s not as good as running for office yourself, or solving problems yourself, but it at least shows you care enough to bubble in someone’s name who will solve the problem.

That’s really what this post is about. Voting. Go vote kids.

What’s the point of all of this? Point is you have agency as a viewer and you can be passive and watch a show die. Or if you really care about it, share your love. You might think it doesn’t make a difference, but there is strength in numbers. You never know. You just might “Chang” something. That applies to most life things; not just TV.

I hope you’re inspired, dang it!

I’ve digressed. Community is a good show that was able to strive through six seasons despite it’s struggles and setbacks. So go watch it! Then go watch Rick and Morty  and listen to the podcast Harmontown.

P.S. I am not Dan Harmon’s PR person. I just happen to like the stuff he produces. So there.

Andrea Justine Millard is a graduate from the University of Texas at Austin. She has a B.S. in Radio-Television-Film and she resides in Los Angeles, California as a writer and producer. View all posts by andreajmillard