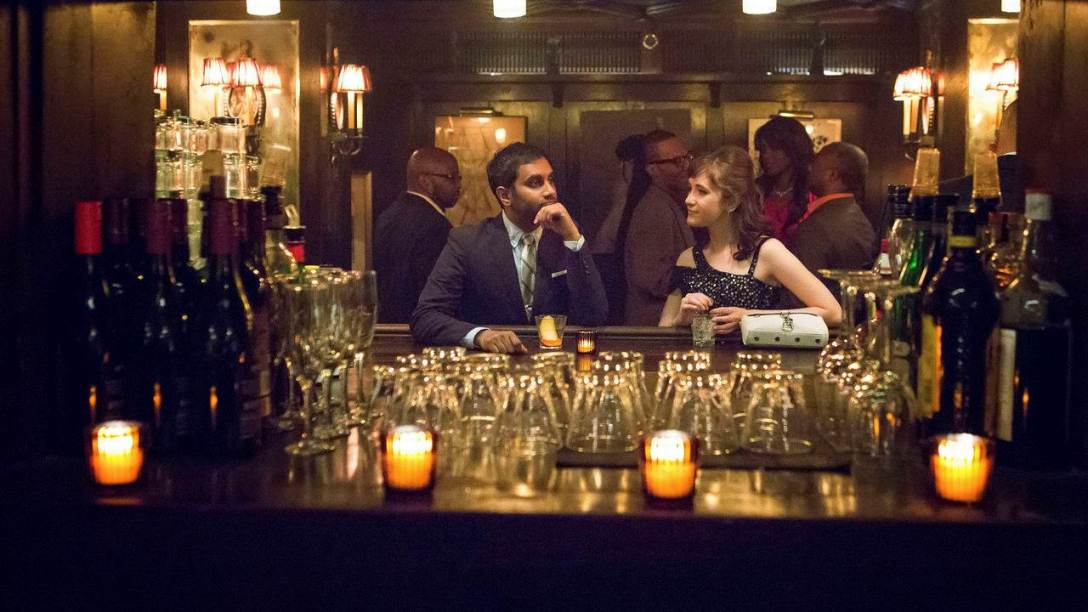 Watching an episode of the television series Master of None on Netflix is like watching visual poetry. Like a poem, each episode of Master of None focuses on a central idea, utilizing the formal tools of film-making like aspect ratio and editing to communicate just as poetry uses meter and rhyme scheme. Even though there is an over-arching story in Master of None’s seasons one and two, each episode can be viewed as self-contained, captivating a particular viewpoint on an issue, or a particular perspective on life generally. In  case of Master of None, the particular perspective is usually that of the kind not typically demonstrated in mainstream media (like the deaf bodega clerk in “New York, I Love You” season 2, episode 6).

One of the most notable formal components of Master of None is its use of aspect ratio – the ratio of width to height of an object. For film, it specifically means the width to height ratio of the images on screen. Master of None was shot in 2.35. A non-technical way of saying that is very, very wide or cinemascope (think Ben Hur wide). Speaking of Ben Hur always makes me think of the tag line for Monty Python and the Holy Grail.

I’m going to take a moment to let that joke set in – epic-ness seems thematically relevant to a post about Master of None.

Before now, aspect ratio was confined to technological constraint and industry standard. For instance,  movies were shot in 4:3 or 1:33, because that was the initial size of the film strip (35mm) in silent film. But later, when the talkies arrived, the film strip size needed to be bigger in order to accommodate sound and thus the Academy Ratio of 1.37 was born. Then later came ratios with their own names: Cinerama (2.59) an epic style that utilized three 35mm cameras to record and 3 projectors to project onto a wide, curved screen (ex: How the West Was Won); and Cinemascope, what Master of None was shot in (2.35); and what you might find as the typical aspect ratio in your HD Widescreen home theater 16:9 (1.77), a compromise between 1.33 and 2.35.

Beyond looking at aspect ratio in terms of industry standards, however, today aspect ratio can be looked at as a formal choice. When you lop off a wide aspect ratio suddenly the mood has changed. An expansive wide screen showing you a dance sequence meant to be in 2.35 will feel constricted in 1.33. Also you may be cutting out some of the dancers from the shot. They rehearsed for like 6 weeks, man!

But maybe sometimes you want the image to feel restricted or boxy. It’s your choice, bro. For instance, Wes Anderson’s The Grand Budapest Hotel changed aspect ratios within the film.

In the case of Master of None, the aspect ratio gives it a really cinematic feeling unlike what you usually see on television. The show’s aspect ratio reaffirms the feeling that each episode of Master of None feels like it’s own thing. A poem, or more specifically a short film. Something that – based on the tradition of aspect ratio – should be meant for a theatrical screen. Moreover, the setting of Master of None is New York and later Italy in season 2. In terms of production value, those are locations you want to show off in a large, wide frame.

The show’s title itself could even be enough reason to chose a cinemascope aspect ratio. This is a show about Dev, an actor on the tipping point of a big break trying to master his career, his relationships, his value system but he is only human and yes, I’ll say the the title now – Master of None. Showing him as a small figure in a big, wide world solidifies the difficulty of trying to master your own fate and experience all life has to offer (some serious FOMO in this show) as a tiny human in a world full of tiny humans tackling landscapes capable of much bigger things than themselves. Woah, this shit just got deep. Moving on!

The cinematic aspect ratio works well in tandem with the style of Master of None, a style strongly influenced by foreign cinema. Season 2 in particular appears referential to Italian and French cinema. The facts fit the bill too. After season one of Master of None, Aziz Ansari did travel to Modena, Italy and studied classic cinema from Vittorio De Sica, Michelangelo Antonioni, Jean Luc Godard.  At the top of season two we even start in black and white and the plot centers around a thief, a direct reference to Vittorio De Sica’s Bicycle Thieves (1948). Later in season two, we also see Antonioni’s La Notte (1961) referenced in episode “Le Nozze” (season 2, episode 2)  and his L’Avventura (1960) in “Amarsi Un Po” (season 2, episode 9) You can also note the Godard and Truffaut in the general plight of the youth, the coolness, the adventure, and the experimental imagery.

But what really sets each episode apart in terms of being like a poem or short film is the high concepts of episodes. High concept episode examples include:

It’s clear Aziz Ansari and Alan Yang, creators of Master of None have their fingers on the sociological pulse of millennials. They know what they are thinking, feeling; they also have the personal experience of being one in today’s world. All of Master of None feels hyper-culturally relevant. But instead shouting a blatant cry, Ansari and Yang have achieved a cultural influence in  subtle but more powerful way.

Structurally, the way some of these episodes are composed editorially blows my mind. Particularly “First Date” (season 2, episode 4) which seamlessly streams together multiple first dates into one epic first date all at the same location. It’s achieved so effortlessly with no confusion whatsoever. I know exactly which dates are hits and misses. The performances are so on point, the characters so clear. The episode is a work of directorial and editorial genius. I can only imagine how much planning it took.

Like all art, Master of None falls into the art imitating life imitating art framework, but unlike most television shows Master of None is a cut above in the art department (pun intended). Like art students, Aziz Ansari  and Alan Yang studied the greats, learned from their canvases, and used some of their techniques to compose something both referential and new. Hyper-relevant, but also a throwback to art cinema from before their time.

Even if you didn’t know the history of aspect ratio or haven’t seen an Antonioni or Godard film, you could still agree that Master of None is visually striking…

…emotionally grabbing, and culturally relevant. The episodes stick with you in the same way a line of poetry sticks with you after you read a poem.

Andrea Justine Millard is a graduate from the University of Texas at Austin. She has a B.S. in Radio-Television-Film and she resides in Los Angeles, California as a writer and producer. View all posts by andreajmillard